Heifer at an organic dairy farm in northern Spain, Asturias.

History of previous trauma to right hind limb from which she had fully recovered. No previous history of mastitis.

Palpation revealed induration and oedematous areas, and a painful reaction to touch & milking. Reactive right retro mammary lymph node. Moderate temperature (39.3C), eating and drinking. The reproductive tract was inspected for any signs of infection (recent parturition), but did not reveal any abnormalities. Complementary California Mastitis test was performed in all quarters and yield a very positive reaction only on the right hind quarter, with an increase in Somatic Cell Count. Microbiology was not available.

Taking into consideration the clinical history, and the acute unilateral onset of the pathology, primary trauma to the udder was suspected. Differentials included systemic disease, metritis, and septic mastitis. These were discarded due to the lack of any other clinical symptoms to support such diagnosis, and the overall good physical condition of the individual heifer.

Straight after milking the heifer started receiving homeopathic treatment, Conium Maculatum. This treatment has an affinity to traumas of the mammary gland. Strength & dose were 200ch twice a day for 3 days, followed by 200ch once a day for a total of 5 days.

The following day -prior to morning milking- induration had subsided and inflammation of the right quarter had almost resolved completely. Milk production volume had resumed on all four quarters with only abnormal composition of the right hind quarter, which was positive to CMT (Picture 3).

A check of each individual quarter revealed milk within normal range. The California test was negative and the Somatic Cell Count was low, therefore milk of the worse affected quarter was suitable for collection. ( picture 4, 5)

Detailed clinical exam of this heifer and the use of Homeopathy managed to achieve a complete resolution of the disease process without the need for intra-mammary and/or systemic antimicrobials. In addition to this, laboratory sample analysis was not needed to cure the disease, which would have been impossible as the consultation occurred during the weekend. During treatment the milk from the non affected quarters was suitable for collection as this heifer was healthy and not being treated with antibiotics. It is also noteworthy that during treatment no antimicrobials were excreted onto the environment. 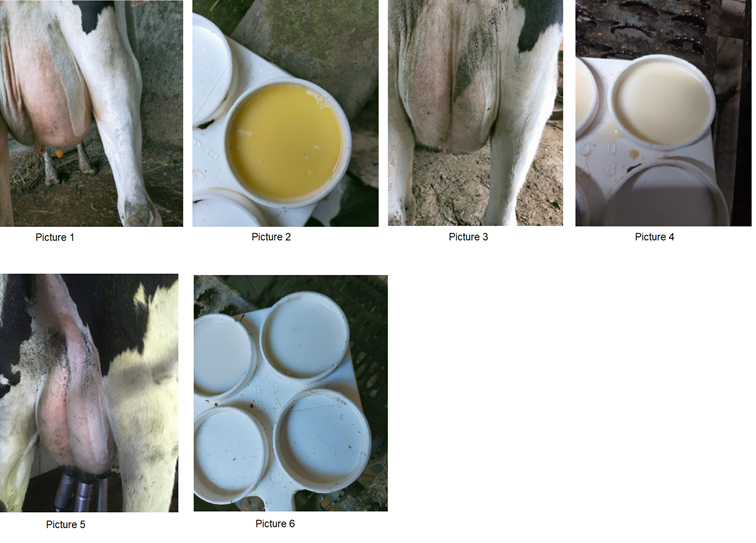